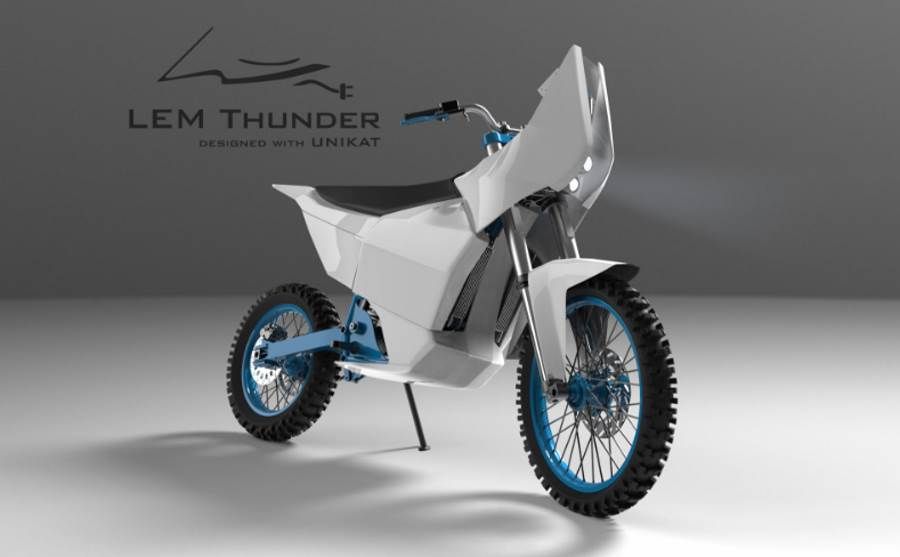 Students from the Scientific Circle of Vehicles and Mobile Robots from Wroclaw University of Technology are building Poland’s first Light Electric Dakar Motorcycle – LEM Thunder. The motorcycle will have its premiere already in June.

– We design the frame, swingarm, battery, electronics and many other componentsow motorcycle. While the design of the motorcycle was designed by the Wroclaw-based company Unikat Motorworks. The vehicle will compete in the prestigious SmartMoto Challenge, ktore will be held this year for the fifth time in Barcelona and for the first time in Poland in Wroclaw – mowi Radosław Pietras from the Scientific Circle Vehicleow and Robotoin Mobile.

The young designers already have several successes to their creditow. Last year, their LEM Falcon motorcycle took first place overall in the aforementioned SmartMoto Challenge in Barcelona. – The LEM Falcon cross motorcycle gave us a set of victories in Spain. We took first place in the general classification, winning also in static and dynamic competitions – comments Pietras.

LEM – Light Electric Motorcycle – is a series of single-trackow constructed by studentsow from the Wroclaw University of Technology. Prior to the LEM Falcon vehicle, students constructed electric motorcycles designed for uniformed services – LEM Bulle, for suppliercoin ordered take-out food – LEM Napoli and a city motorcycle MOS.

The new production is to be an electric motorcycle specially prepared for the toughest rally in the world, which is the Dakar Rally. – We plan to equip it with all the necessary functions and enhancements to mohead to face the toughest challenges – reports Szymon Duda, leader of the LEM Thunder project. – We have a lot of experience as participants in such competitionsow, as we have been appearing regularly in Barcelona with our electric motorcycles since 2013 – admits.

The result of the project is to be an electric-powered cross-country motorcycle with an engine power of up to 30kW, which will allow for podroThe motorcycle with a range of 90 kilometersow. The range can be increased, but aiming for victory the students reduced the weight of the vehicle. – During the construction of the machine, we use 3D printing technology, and our ownoThe carbon fiber used for the plating enables a significant weight reduction, whichoWe estimate the weight at 120 kilogramsow – admits Duda.

Students have been promoting electric vehicles and the fashion for electromobility for several years. To further promote eco-friendly vehicles they are organizing the Wroclaw SmartMoto Challenge – the first electric motorcycle competition in Poland.

During the competitionow will be judged not only on the motorcycle and its dynamic capabilities, but also on the team’s business skills. The event will feature roAlso the Festival of Electromobility, at whichohe electric vehicles will be presented. The audience will be able to see and sprob ride electric vehicles, from bicycleow, through motorcycles to cars.

Wroclaw SmartMoto Challenge will be held August 22-26 on the campus of Wroclaw University of Technology.