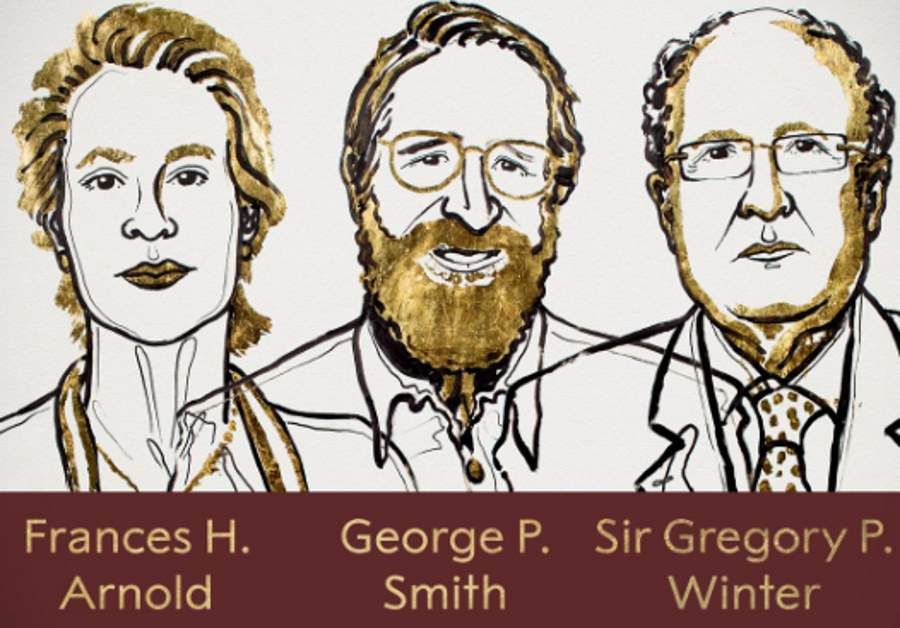 KroThe left Swedish Academy of Sciences has decided that this year’s Nobel Prize in Chemistry will be divided into two parts. Half will go to Frances H. Arnold, and the second part will go to George'a P. Smith and Sir Gregory P. Winter.

The researchers were honored for harnessing a mechanismoin evolution to produce enzymes essential for humansow and antibodies. The committee emphasized their inspiration by the forces of nature and their use of the principles within it.

Methods developed by Nobel laureateow are now being developed on a global scale to promote a greener chemical industry, produce new materialsow, production of zroof sustainable biofuels, mitigating the diseaseob and saving lives. „This year’s Nobel Prize winners in chemistry have shown that chemistry can take over evolution and be used to targetoin, whichore bring the greatest benefits to humanity” – reads a press release from the Nobel Committee.

Frances Arnold in 1993 carried out the first targeted evolution of an enzymeow, whichore are proteins that catalyze chemical reactions. She has since improved the method she used, ktora is now routinely used to develop new catalystsow. Applications of the enzymeoin created by this method include more environmentally friendly production of chemicalsow, are also used in the production of pharmaceuticalsow or biofuels for a greener transportation sector.

Frances Arnold is the fifth woman in history to be awarded the Nobel Prize in Chemistry. The first was Maria Curie-Sklodowska, and the second was her corka, Irene Joliot-Curie.

In a nutshell, it can be said that Arnold developed a method ktora speeds up the process of evolution, and to some extent it can be controlled. Her method involves altering the gene encoding a specific protein in such a way as toob to acquire new characteristics desired by researchers. The change itself benefits from the mechanism of theoin evolution, only that at an accelerated rate. It is something like guided or designed evolution.

George Smith has developed a method known as phage presentation, in ktorej bacteriophage – a virus that infects bacteria – can be used to develop new proteins and antibodies. The method was presented in 1985.

Sir Gregory Winter used the phage presentation to produce new pharmaceuticalsow. Currently, antibodies are produced on phage presentation, whichore can neutralize toxins, counter autoimmune and oncological diseases. The first of such drugsow – adalimumab – was approved for use in 2002. It benefits patients with rheumatoid arthritisow or inflammatory bowel disease.

Watch the moment the 2018 Nobel Prize in Chemistry is announced.

Frederick Sanger is the only one to receive the Nobel Prize in chemistry twice. In 1958 it was wyromourned for his pioneering method for determining the structure of proteins, and in 1980 he was awarded for developing a method for sequencing DNA.

The youngest Nobel laureate in chemistry is Frédéric Joliot, whoory was 35 years old when he received the prize in 1935. Frédéric received the prize along with Irène Joliot-Curie – cork to Marie Sklodowska-Curie, for the discovery of artificial radiationworczości. The oldest is John B. Fenn awarded in 2002. During the awards ceremonyod was 85 years old.

Nobels in medicine and physiology were awarded on Monday. The winners are James P. Allison and Tasuku Honjo. Scientists have been recognized for developing anti-cancer therapies that involve unblocking the action of the immune system so that it attacks the comorks of cancer. Read more in text: 2018 Nobel Prize in Medicine and Physiology awarded.

In the regulations of the award stands a provision that it can be awarded to a maximum of three people. The laureate or laureates will receive 9 million this yearoin Swedish kronor. This, in terms of conversion, makes about 870,000. euro. They will also receive a medal and a diploma.